First in the family

CQUniversity has been awarded five stars and ranked second in Australia for its 'first-generation student ratio' in The Good Universities Guide 2020 rankings release.

Recent graduate Shae Marr is one of many students and alumni who personify CQUniversity's leadership in enabling new generations of families to attain the benefits of tertiary education.

As a proud Indigenous woman, Shae is determined to become a role model for current and future generations. She sees her 'first in family' achievement as a major accomplishment. 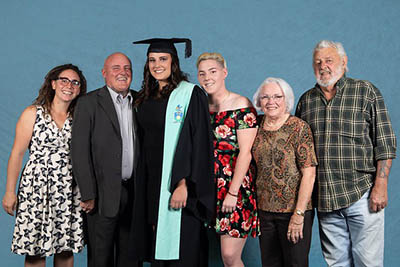 She had originally planned to progress straight from high school to university in Brisbane but found out she was pregnant with her first son, only a few days before flying out.

"It was four years later when I started seeing my friends starting to graduate that I decided I should have another go at enrolling in tertiary study," Shae says.

"I was working in retail but securing a CQUniCares BHP Indigenous Scholarship gave me the freedom to focus on my studies with CQUniversity, while also funding childcare."

Shae now has two young boys and has also helped care for her partner's two young sons for the past 18 months.

She also juggled her study alongside a volunteer role as Director and Chairperson of the Central Highlands Aboriginal Corporation.

"My life was pretty full on as a mother, student and volunteer; it certainly helped being able to study via distance education, meaning I only had to come to Rockhampton for residential schools, where I really enjoyed putting my knowledge into practice," she says.

"My assignment for Food Science and Analysis was published in an international scientific journal during my second year, under the title: The Use of Electrochemical Biosensors in Food Analysis."

Shae was delighted to be offered a role with the Emerald office of a global firm, SLR Consulting, while she was still completing her exams. Her job focus is on monitoring groundwater quality at local mine sites, ensuring compliance with environment agreements and reporting to government, meaning she spends about a third of her work time in the field.

Commenting on CQUni's ranking in the 'first-generation student ratio' category, Shae says that education is paramount to closing the gap between indigenous and non-Indigenous Australians.

"Education not only provides greater career prospects but, by working and being an active member of society, quality of life is improved in the way of financial, mental and physical health," she says.

"For many Indigenous families, it is hard to break the cycle. For generations, Indigenous Australians have been isolated and pushed out of society, being denied basic human rights such as education, healthcare, employment, our land and culture, which for many, resulted in substance abuse as well as mental and physical illness.

"One of the hardest things to overcome, living in a low-socioeconomic family, is exceeding the expectations put on you by branching out and doing more than you have ever seen or known; doing something that no one in your family has ever done before.

"It's extremely difficult to do with little to no support from your community, which is why programs such as the scholarship I received during my studies are so important. Yes the financial side of the scholarship helped me, but the support and mentorship I received from AIEF (Australian Indigenous Education Foundation), which was in partnership with BHP for my scholarship, was so helpful in keeping me motivated and on track.

"This doesn't only apply to Indigenous people though. This cycle is prevalent throughout any group which has struggled with a disconnection from society. Education is key to allowing people to increase their earning capacity and improving upwards social mobility.

"I have been incredible lucky in my family that education was always made a priority, even as far back as the Stolen Generation. When my great-great grandmother was stolen and placed in the care of a teacher in Murillumbah, she was fortunate enough to be allowed to sit in on his classes and get a basic education, learning to read and write, which for an Aboriginal girl in those times, was unheard of.

'The importance of education stayed with her, having been quoted saying 'Education is the way out'. She made sure all of her children were educated, with my great-grandmother attending schooling until grade 8, another massive accomplishment for an Aboriginal woman of the time. This trend continued, with my grandmother finishing grade 12 in the 1960s, my father finishing grade 12 and getting a trade certificate in the 1990s, and then me graduating university.

"But not all Indigenous families are as lucky to have the opportunities I have had, with many still generations behind and struggling to make it through high school; which is why, if unable to get support from their families, extending the network to get as much support and encouragement as possible is the next best option."

"And that is because CQUniversity understands how truly powerful and transformational education can be over the course of a lifetime," Professor Klomp says.

"The qualifications achieved by our graduates will not only provide personal benefits and benefits to their chosen industry and community ... they will also have an impact on generations yet to come."

Speaking at a recent graduation ceremony, Professor Klomp asked graduates to imagine the multiplication effect they had set in motion.

"Studies have shown that by crossing this graduation stage, your children are now far more likely to attend university themselves.

"And then their children, even more so again. Just try and imagine for a minute the multiplication effect you have set in motion today in terms of the lifelong benefits of earning potential, workforce contribution, societal change and community prosperity that will now ripple down through the generations of your own family. Let that sink in.

"Today, you have not only opened doors for yourself, but almost certainly for everyone else around you, and behind you."

AIEF has changed my life in ways I never could have imagined and it is all because you started a foundation that aimed to give me and other Indigenous kids a chance to get an amazing education.