Open to students from Years 5-12, the competition invites entrants to freely express their views on a subject that they feel passionate about. Sancia’s piece ‘Totem’ is a vivid exploration of identity and the importance of Country, culture and family, detailing being conferred her animal totem, the goanna, as a young Indigenous woman. 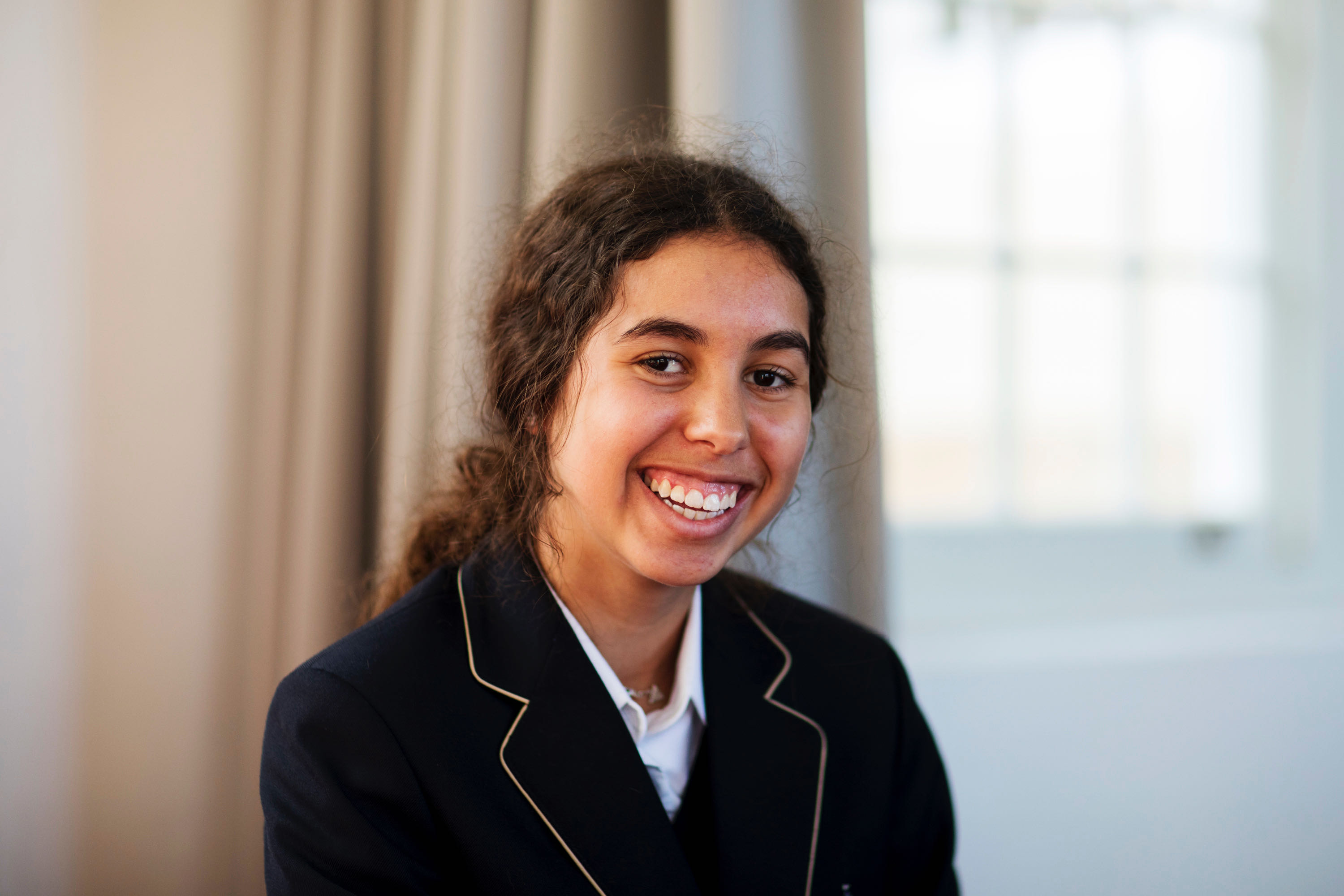 Sancia took out the Year 9/10 category before being named the overall winner of the competition, ahead of 119 other finalists from among over 3000 entries from NSW, ACT and Tasmania.

“I wanted to focus on something personal to me, my family and my culture, rather than a bigger global issue such as social justice which while important, isn’t as personal,” said Sancia. “In particular I wanted to share how totems aren’t novelties or mythology, but very real, powerful and meaningful for Indigenous Australians.”

Sancia was presented with her award by Deputy Chancellor of Western Sydney University Elizabeth Dibbs and competition patron Lisa Wilkinson AM. She received a trophy along with an assortment of prizes including an engraved iPad, and an all-expenses paid VIP pass to spend a day at the Museum of Australian Democracy in Canberra. 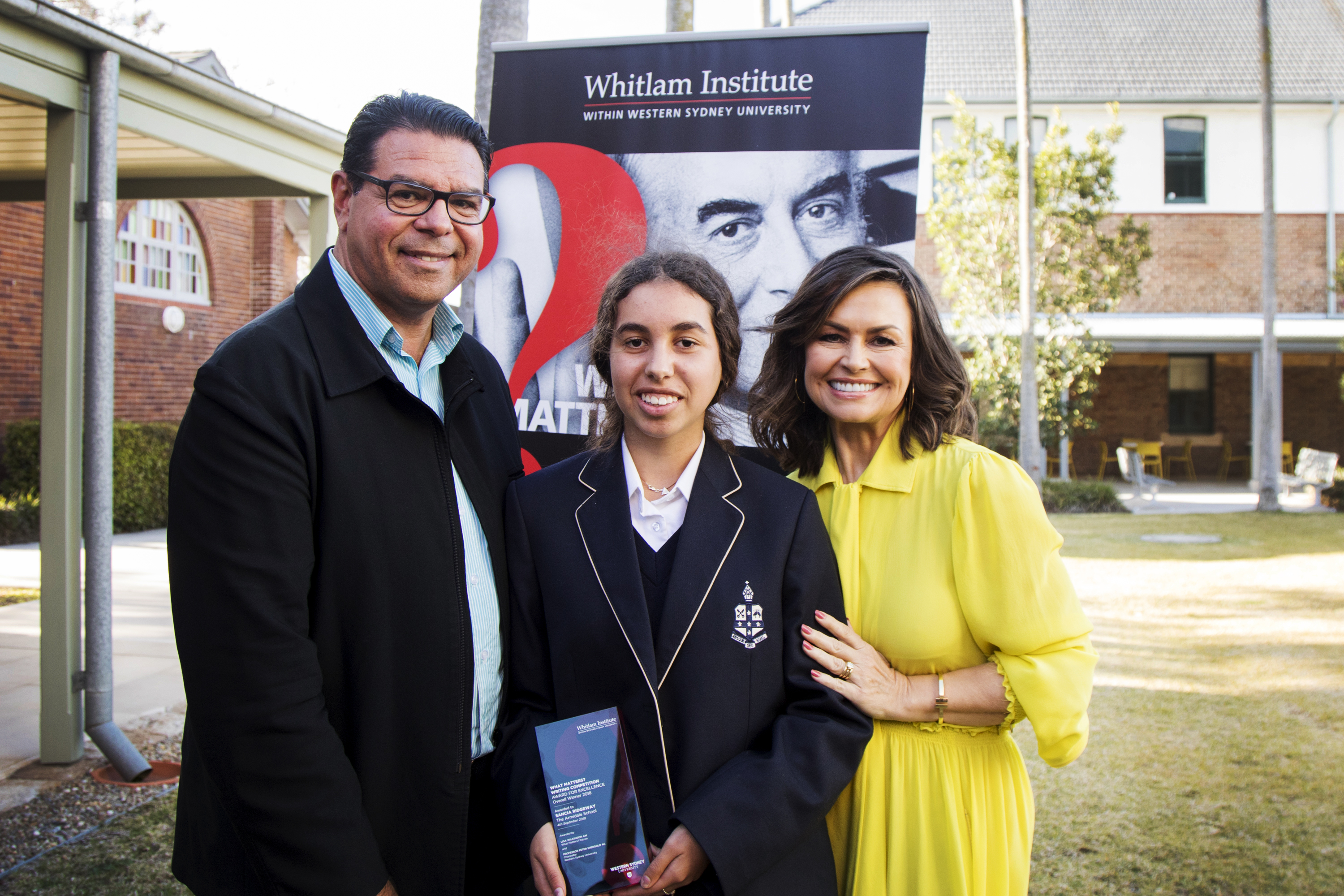 Congratulations, Sancia! You can read her award-winning story ‘Totem’ below.

A hot Christmas Eve. We were sitting in my Nana's lounge room. The reflection of the sea created a late afternoon heather, grey light. Uncle Harry, dark with wild white hair. Sprouting from his balding head, coming out of his ears and his nose. A light layer of white hair sprinkled on his earthly toned skin. The contrast always confused me. He was a respected elder for our people. A true influencer of the people. He was the leader of our tribe.

He was sat on my Gramama's favourite chair. It was woven turquoise and copper. He gestured me to sit and I followed his gentle orders. With the sounds of the sea in the background. The seagull's distant argument between one another and the hypnotising lull of the waves. Something felt sad and fleeting. He leaned in and told me in a wavering voice, I was the goanna. Only ten years old I had waited for this day to come. I wasn't expecting it, I wasn't ready. Too young, compared to the others. They were fourteen, fifteen, sixteen.

He reassured me, explained that I was wise beyond my years. Goanna was my totem. Confidence and pride. A protector for the people. It had been a tough year, we all knew this. Uncle told me that when times were harder that I had my goanna skin to shield me, I could extend it to shield others too. He told me my purpose in life was to help others from the darkness and weary things in the world.

When I look back the coming days after were a blur. Just another Christmas, just another celebration. Only two days later Uncle Harry passed away. We were meant to meet him by the water. On the beach. He had a heart attack. A trend in our family. A predictable and unsurprising way to die. I had so many questions I planned to ask him.

We visited him at the hospital. The whole mob went to the hospital. Aunties sobbing on the linoleum floor sobbing with their heads in their hands. Wailing. I felt it in my ribs. There was a line of black wilting relatives. Waiting to pay their respects and see him for one last time. I joined the line hoping to find the answers. My older brothers and cousins pushed me back, saying I was too young. I looked to my Dad, and pleaded with him. My father led me into the room. The room was stuffy. Choking.

I couldn't stay. I ran to the car. On the drive home, I felt a deep regret and guilt for not being strong enough. And putting my goanna skin on. When we arrive home, there was chaos. Aunties cackling and arms flapping. They wore their islander floral beach dresses. A goanna had gotten into the house. Looking for eggs probably they said. When I saw that goanna, the speckled ochre and copper scales illuminated by the sun. I realised the importance of my culture.

My Dad came and put his arm around me. He gave me a little rough pat on the back. He told me that this was a sign. A message from the elders. That we needed to be strong in culture and family. That I needed to put my goanna skin on, unknowing to the conversation I had just days before.

Now every time I see a goanna I am reminded to use my goanna skin. And the importance of culture and family. I am reminded what matters.

Being part of the AIEF Mentor Program has given me the opportunity to mentor and guide a student with great potential. It's really encouraging to know that my student appreciates the support and I'm looking forward to being there to watch him grow from strength to strength.